DHARMACHAKRA DAY : Chötrul Düchen, also known as Chonga Choepa or the Butter Lamp Festival, is one of the four Buddhist festivals commemorating four events in the life of the Buddha, according to Tibetan traditions. Chötrul Düchen closely follows Losar, the Tibetan New Year. It takes place on the fifteenth day of the first month in the Tibetan calendar during the full moon, which is called Bumgyur Dawa. The first fifteen days of the year celebrate the fifteen days during which the historical Buddha displayed miracles for his disciples so as to increase their devotion.

Chotrul Duchen, meaning “Great Day of Miraculous Manifestations”, is one of the four great holy days observed by Tibetan Buddhists, always occurring on the Fifteenth day of the first lunar Month in the Tibetan calendar. During this time, it is believed that the effects of both positive and negative actions are multiplied ten million times.

๑۩۞۩๑ ཨ ཨ ཨ ๑۩۞۩๑ “The Mind transmission of the buddhas of three times is known as a transmission through blessings – naturally perfect blessings of all buddhas of the past and the future and of those who reside in the present. Independent of articulated words this transmission is understood and realized through the natural Sound of Dharmata.” Wellspring of the great perfection – The lives and insights of the early masters , compiled and edited by E.P. Kunsang, The Twelve Dzogchen Buddhas , An excerpt from the great history of the Heart Essence , part One belonging to the instruction section Cycle of the Heart Essence of Vimalamitra , pg 119. Rangjung Yeshe Publications.

Year of the Female Earth Boar 2146

On January 17th 2019 was warm and sunny Thursday when the team of national tv station RTV Slovenija /Duhovni utrip visited us for 2 hours interview . Journalist Mrs. Mateja Šetinc prepared interesting questions about Buddha Dharma 10th Anniversary of international publications activities  at the Heritage of Mankind and of our youtube channel: OPEN BUDDHIST FORUM INTERNATIONAL . We spoke about few interesting topics of which some are included in  eight minutes interview which was on air on Saturday , February 2 . 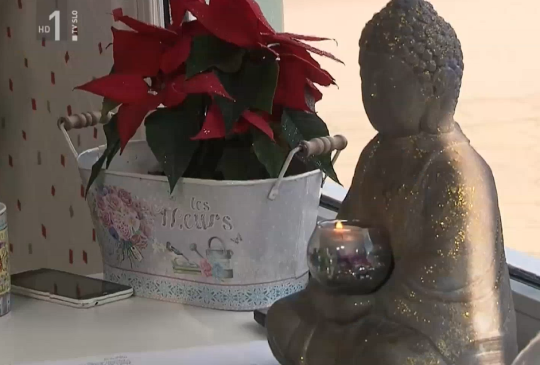 Mateja Šetinc : In Ptuj area we visited the leader of organisation Buddha Dharma which was registered as religious community on February 1995  (1)  The representatives says that the Community is developing in harmonious and creative ways . At the end of 2018 they celebrated 10th Anniversary of their international publications activities with the title Heritage of mankind . 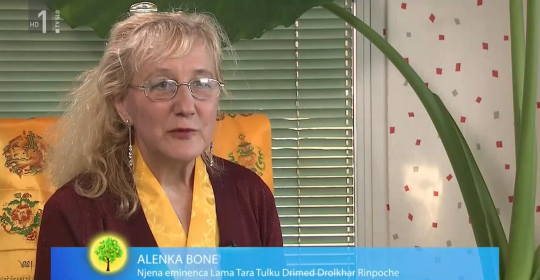 Alenka Bone’-Her eminence Lama Tara Tulku Drimed Drolkhar Rinpoche : Our youtube channel is called Open Buddhist Forum International. It was created on October 8th 2007 ; it means we  now have 11th Anniversary of our publishing at the channel. We started with supporting the protests of Buddhist monks from Burma against militant government.

Later we posted sixty-two videos which are called Visual Dharmas . This is contemporary way of teaching Buddhism in 21st Century .  Our sixty-three videos /Visual Dharmas have more than 1,6 millions of views . Every video also have selected readings and different links for researchers , meditators and practitioners of Buddhism . Many of these videos are to true Buddhist practice : there are Texts where meditator can learn to recite te Text . This is kind of Buddhist Textbook.

First of all everyone who wish to proceed on the Buddhist path or to personally develop himself must apply Buddhist ethics: to keep five ethical precepts of Buddhism : not to eat meat, not to drink alcohol and other precepts which were taught by Buddha Shakyamuni . Then he can use our videos  for his meditations . For example : we have video Verses of prayer to the Eight Noble auspicious Ones : he can recite this prayer o reven memorise it .

Verses of Prayer to Eight Noble Auspicious Ones by Mipham Rinpoche

Mateja Šetinc : Leader of the community also teaches  Buddhism and Buddhist meditations herself . She dedicated herself to special branch of Tibetan Buddhism .

Tara Rinpoche : We publish at the Heritage of Mankind – Treasure of pure Dharma . I developed myself to Ati Yoga Dzogchen special lineage which is secret branch not well known today. I found this important : my spiritual mission is to promote this branch of Ati Yoga Dzogchen. This lineage is connected to Dra Thal Gyur Tantra of Dzogchen Upadesha . Its contemplation on inner secret Sound and Light .

Mateja Šetinc : In which way you direct yourself in meditation on secret sound and light and what is the purpose of meditation ?

Tara Rinpoche : The aim of contemplation on secret Sound and Light is to achieve the Body of light , to dissolve our material body into Light . … as the masters of our lineage have already done : 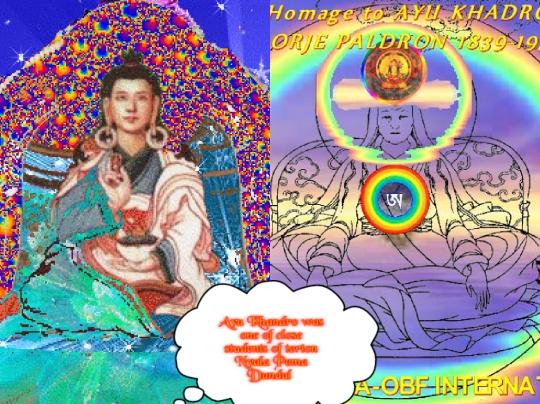 for example Nyala Pema Dondul in East Tibet , Ayu Khandro and also in recent times some practitioners succeed to accomplish this .

Mateja Šetinc : You have your Buddhist name . What does it mean and why you have adopted it ? 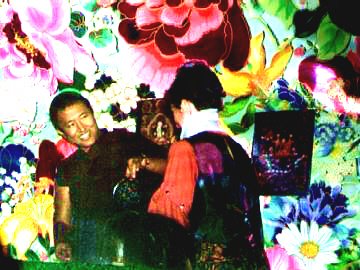 Tara Rinpoche : I received my Buddhist name in the year 1994 when Dzongsar Khyentse Rinpoche  as the first Tibetan Lama taught (the Dharma) in Ankaran (2) .  At that time Rinpoche invited people who were present at his seminar to receive the Refuge . It was 8th lunar Day which is dedicated to Arya Tara and Medicine Buddhas . Rinpoche said : »Those who wish to receive the Refuge can come forward …« . I received the name Tara … Many people from Slovenia received Refuge at that time . 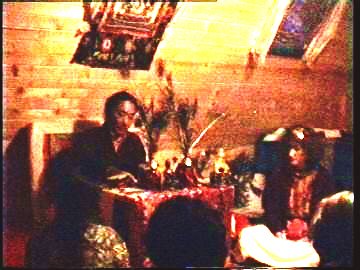 Later I asked Drikung Ontrul Rinpoche : There are twenty –one Taras. Which Tara am I ? » Rinpoche choose  small pice of paper among many papers during the Refuge ceremony and give it to  me . On the paper it was written : Drimed Drolkhar which means White Tara . I beleive that this name is very compatible with my personality because I practice  Holistic medicine : wellness, Ayurveda, Tibetan medicine and Traditional Chinese medicine . All these fields of healing .

Mateja Šetinc : We speak a lot about happiness . Who is happy person , how is happy life … What is happiness for you ?

Tara Rinpoche : First of all good feelings , health . We say : health is the greatest treasure – when we are sick we are more aware of this . Happiness is good feelings , inner peace , relaxation , creativity . All this is happiness. 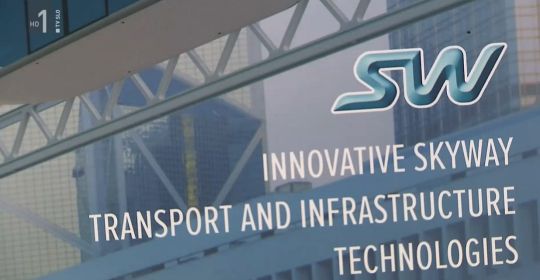 Tara Rinpoche : First inside , then also outside . Nature means a lot to me . I am ecologically aware .  Our religious organisation  collaborates with the project of SkyWay (3) This is global project of Ing . Yunitskiy who is good friend of His Holiness the Dalai Lama . 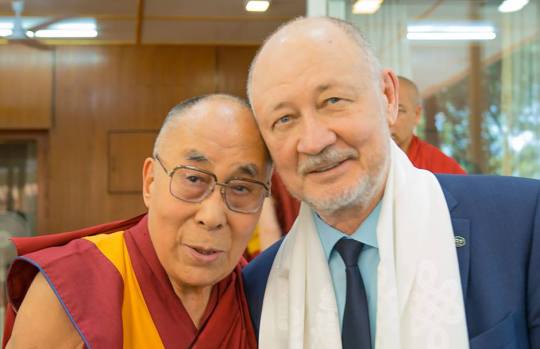 At the end of the interview I recited 100-syllable mantra of Buddha Vajrasattva which is part of many sadhanas .

BUDDHISM & HUMANITY represents progressive Buddhism in 21st Century A.D . It is non-sectarian or Rismed movement in the pure lineage of Shakyamuni Buddha .

2.3. This year Chotrul Duchen comes on Tuesday, 19th of February.
Chotrul Duchen is one of the four Buddhist festivals commemorating four events in the life of the Buddha Shakyamuni.
It marks the anniversary of Buddha performing fifteen days of miracles in order to inspire devotion in his disciples. It takes place on the fullmoon day of the first month in the lunar calendar, which is called Bumgyur Dawa.
During this month the effects of positive and negative actions are multiplied 100 000 times.
On the full moon day of Chotrul Duchen it is believed that the effects of both positive and negative actions are multiplied ten milions times.

May the merit and virtues accrued from this work adorn the Buddha´s Pure Land,
Repaying the four kinds of kindnesses above and relieve the sufferings of those in the three paths below.May those who see and hear of this all bring forth the heart of Understanding and live the Dharma for the rest of this life. Then be born together in the Land of Infinite Bliss. Homage to Amitabha Buddha ๑۩۞۩๑

4.3. Mr. Bruno Ribeiro da Silva , Sao Paolo, Brazil ,
founder of Gamaleoes design and IT  at Domo bussiness , Sao Bernardo do Campo
So Proud of You Master Tara Rinpoche.
Congratulations for your brilliant energy and your extremely kindness and compassion!
I keep my Espiritual goals making efforts to give my contribution for your concerns and guidance.
Gratitude. I am glad on making part of your journey.
Best wishes,
Bruno Ribeiro – Senge Surya Nyima 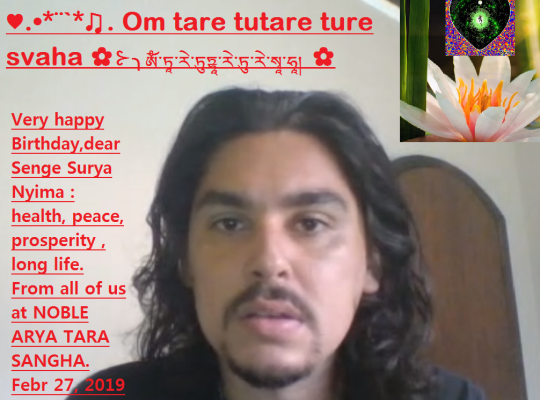 HERITAGE OF MANKIND-TREASURE OF PURE DHARMA